The allied plan was in five phases:

The main amphibious landings involved three British divisions and the Canadian Division in the east, and two US divisions in the west, all supported by heavy off shore fire from warships.

On the east side 13th Corps would land two divisions (5th and 50th) to capture Siracusa. Two Divisions of 30th Corps were to land on the south east corner, the 1st Canadians on the left (west) and 51st Highland Division on the right on the Pachino Peninsula.

The 51st Highland Division would land at the southeast tip of the island near Pachino on a four battalion frontage.

The landing was lead by 154 Brigade divided into two ? the main part of the Brigade and 1st Gordon's Group.

The 51st Highland Division was tasked with capturing Pachino and then advance on the Noto-Avola road to relieve 50th Division, part of 13 Corps. They were then to continue the advance towards Viccini. 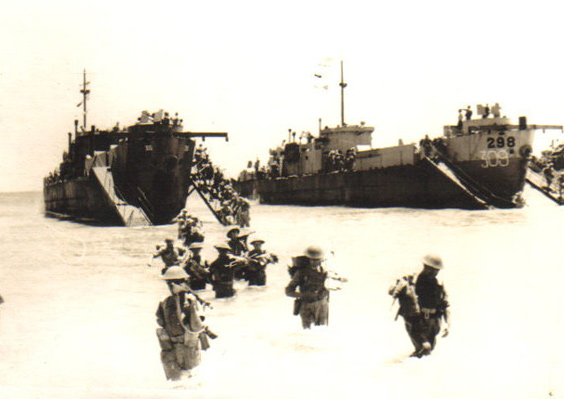 They landed on 10 July, largely unopposed, and pressed in land to secure the bridgehead. The 7th Argylls lead the way landing on the beach at 0245 hrs on 10 July. They had no opposition and advanced inland to Pachino in the first 24 hours and moved on to Nota which they reached on the evening of the 12th July. From there they moved to a position 12 miles north near Palazzolo.

"C" Company of 7th Black Watch got on the correct beach but the rest of the Battlion were landed in the wrong place and it was not until 0615 that the Battalion was ready to advance, but by 0700hrs they had taken their objectives.

1st Gordons Group objectives were Capo Paassero island and the village of Portopala, a tunny factory, light house and a ridge beyond dominating the approach to Pachino. By 0900hrs they were on the ridge.

154 Brigade provided a full account of the journey from Sousse from the 28th June to the landing on Sicily on 10th July 1943.

Despite one or two problems the other landings all succeeded, opposition was light and 154 Brigade established the bridgehead. 153 Brigade started to land at 0630 hrs and passed through 154 Brigade. 152 Brigade and the Divisional Tactical HQ also landed without opposition. The advance north now began.