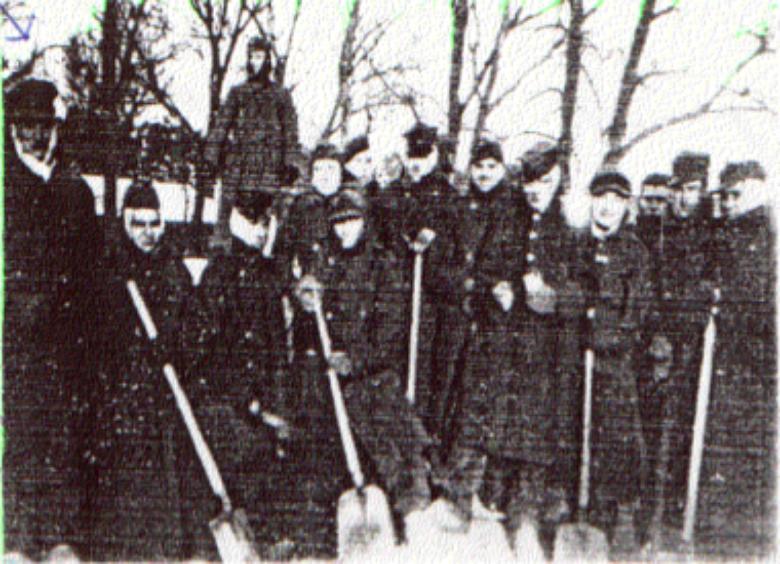 During the first winter of our captivity, we were sent to Gorsdorf, a work camp attached to Stalag XXa. We were set to work building roads in winter conditions, the like of which we had never experienced in England.

This was a hurriedly built camp with one hut, like a long garden shed, to house about fifty men. It was surrounded by double wire fencing; the guards‟ quarters were just outside the fence. There was no water, for months we had to carry it from a farm about a mile away, until in the spring they bored, and found water and installed a hand pump.

The camp was on the edge of a forest in a very remote area, two miles from the small village of Gorsdorf. Its purpose was to supply labour to construct a road and supply free labour for the local Polish land baron, for picking potatoes, etc. The baron was obviously a Nazi sympathiser; otherwise his land would have been confiscated. 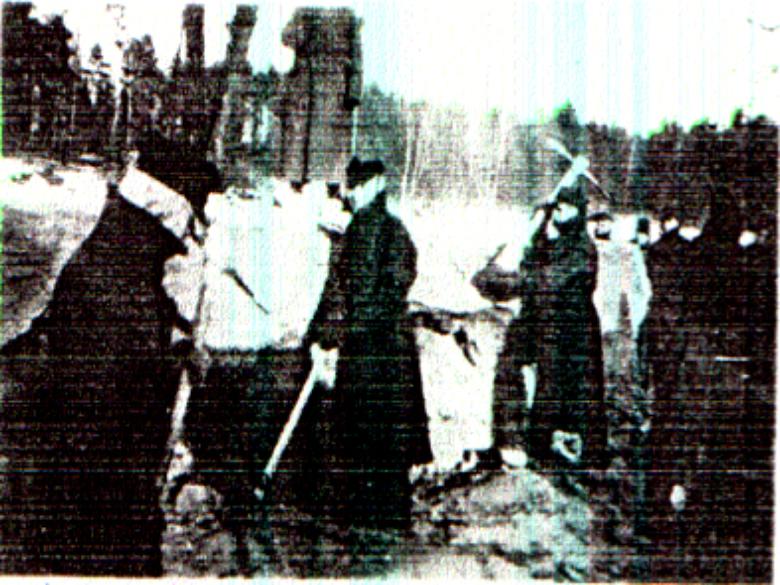 We were provided with a variety of uniforms, and wore footcloths “Fußlappen” and Dutch clogs. The photograph shows just how deep the frost had penetrated.

Most of us were still very poorly after our arrival at the camp, and after a few days a German doctor examined us and prescribed that the dysentery sufferers should have a ration of boiled rice for one week. This was the first and last time we saw rice, but it seemed to work, and the effects of the dysentery started to fade. We were, however, still very weak from malnutrition, and became dizzy when standing up from a sitting or lying position. The food was just the same as at Thorn, one ladle of soup brought to us in the fields at noon, and a loaf of black bread between four men at night, with perhaps a small portion of liverwurst or jam, and, of course, ersatz coffee (made from acorns). We were doing hard manual labour, and literally starving.

Henry Owens at Work Camp No.52, Gorsdorf, 1942. Henry notes that this photograph was "a propaganda picture taken by the German authorities for a German magazine. The British uniforms were given to us for the photograph and were promptly taken back. A German guard took a couple of photographs for us, showing the real situation."

The photograph above was a propaganda picture taken by the German authorities for a German magazine. The British uniforms were given to us for the photograph and were promptly taken back. A German guard took a couple of photographs for us, showing the real situation.

It was well into January 1941 before we received any mail from home, and longer than that before we received a Red Cross parcel, and then it was only one between fifty men. The first winter was bitterly cold; ice formed on the inside of the hut. This melted and dripped down on to the bunks during the day. We only had one thin blanket each, so some men doubled up, squeezing into one bunk, using body heat and the extra blanket for comfort. We were locked in at night, and as the open latrines (with a pole to sit on) were outside the hut, we were provided with two or three buckets for sanitation. These soon overflowed and you paddled in urine. We would urinate in our clogs and pour the contents out of the small barred window.

I dreamed at night that I was having a banquet, with all sorts of exotic foods, and, strange to say, I invariably woke in the morning feeling revitalised. Alas this did not last long. I also longed for Ma‟s bread pudding; not the milky one, but the solid one you cut with a knife. On one occasion we did get extra rations; the Germans were driving the Poles from their homes and land, and the Poles (Bless them!) asked the guards if we could have the surplus food they could not carry. I often wondered what happened to these unfortunate people. On another occasion the guards shot a wild dog, or a wolf, and hung it on the barbed wire for about a fortnight. Our cook then skinned it and put the carcass in the soup. It tasted wonderful.

Next to food, lice were our great worry. They covered the body, and were bloated with our blood. We were sent to a nearby town (Konitz) for delousing. During the march from the railway station, a Polish youth dropped a packet of cigarettes as he passed us. A guard spotted him and raised his rifle, but for some reason changed his mind. The Poles were constantly risking their lives to help us; they were gallant allies who never surrendered their minds or their souls to the Germans.

The delousing, which consisted of baking all your clothes in a vast oven for about an hour, whilst you stood waiting, naked, was not a success; all it did was kill off the lice, but hatched the eggs, so the cycle started again. Eventually, as Red Cross parcels arrived to supplement the meagre German rations, we started to become healthier, and the lice, in the main, departed. To be replaced by fleas, which, although a pest, were preferable to the lice.

Whilst working on the road, we met Polish workers who were transporting materials in their high-sided horse drawn wagons. We were able to get some bread, and sometimes eggs from them, and though we were routinely searched on our return to camp, we managed most times to outwit the guards. Or did they at times turn a blind eye?

We were so isolated that we heard no news. We saw German posters on the walls in Gorsdorf, showing Churchill in his black Homburg carrying a machine gun, with the caption “Murderer”. I also saw a German newspaper cartoon showing Churchill in the boxing ring with Union Jack shorts being pulverised by another boxer with the swastika on his shorts; the caption read, “Wait for the knockout”. This obviously referred to the bombing of England. Every time we spoke to a German guard, they stressed that every town and city in England was “Kaput”, and that our ships were being sunk by the hundred. Later we began to get news by reporting sick, and being escorted to the doctor at Konitz. There we met other British POWs, who passed on news of the war, mostly rumours, but sometimes true, though the news was invariably bad.

I was at this camp for over two years, then my pal Darky Bryant and I were posted to Stalag XXb, Marienburg. The Germans had been looking at our records, and we were classed as tradesmen. They needed us elsewhere.