Brigadier James Oliver
A short biography from 'The Red Hackle'

A short biography of Brig. James Oliver - an extract from 'The Red Hackle' - the Regimental magazine of The Black Watch.

Brigadier James Oliver was probably the most distinguished Territorial soldier in the 51st (Highland) Division in the last war. He is described in the late Bernard Fergusson's book 'The Black Watch and The King's Enemies' as "a fighting man second to none in the regimental history". Certainly he had that asset, priceless among soldiers, of being able to size up a complex situation in an instant, and a flair for being in the right place at the right time. As a battalion commander in the desert and later at brigade level in North West Europe he was the architect of tactical successes for the formations he led in a manner which not only instilled confidence in the men under him, but, importantly, saved unnecessary casualties. 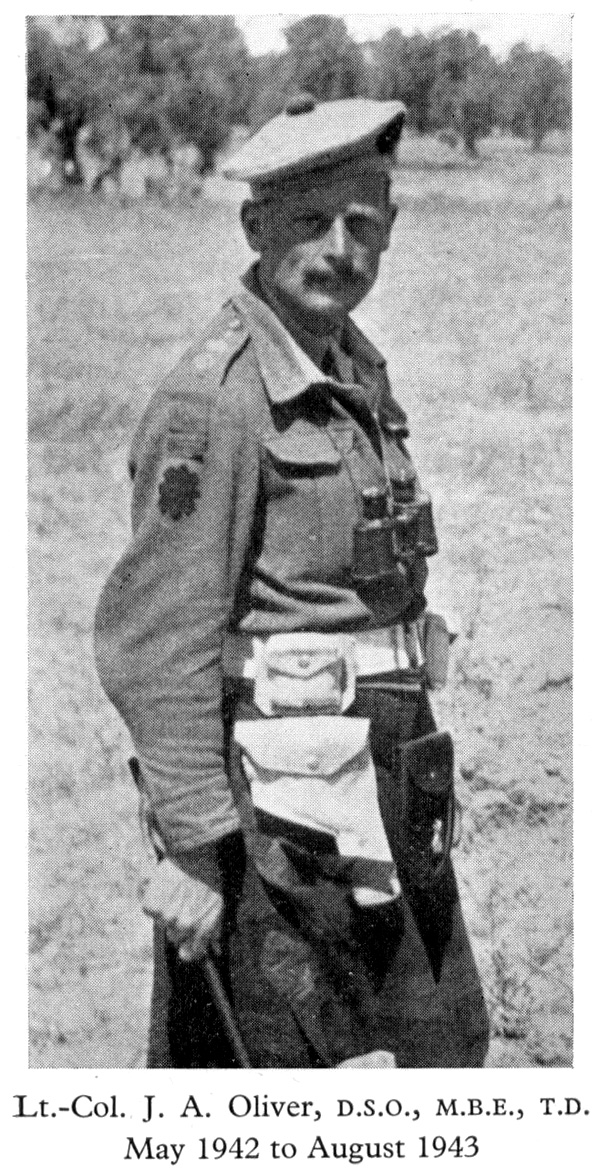 A solicitor by profession, Oliver was commissioned in the 4/5th Battalion The Black Watch in 1926 and on mobilisation became second in command. In May 1942 he was promoted to lieutenant colonel and commanded the 7th Battalion at the battle of El Alamein. Here the clear tactical head for which he was ever after renowned throughout the Highland Division showed itself. Attacking in a confused situation which involved vicious close-quarter fighting Oliver's battalion sustained such devastating casualties that its four companies were soon reduced to the strength of two. In the heat of battle he was able to regroup the survivors as two companies and went on to capture and hold a crucial position. For this he earned his first DSO.

Later, in the fighting short of Tripoli he won his second DSO, again in difficult circumstances where his decisiveness prevented retreating German units from installing themselves in positions from which it might have been extremely difficult to dislodge them. The situation was complicated by the fact that the Germans were using captured British lorries, and were at first, not unnaturally, taken for friends by Oliver's men who had marched in the dark for 14 miles along the sea shore to take them in their rear with the object of stopping them from falling back. Towards the close of the Sicilian campaign he was again promoted to command 152 Brigade in the Highland Division.

In January 1944 he took command of 154 Brigade, also in the Highland Division which contained the 1st and 7th Black Watch and the 7th Argylls. He led it with consummate skill throughout the campaign in North West Europe. When the Highland Division's commander General Rennie, was killed by a mortar bomb on the banks of the Rhine as he returned from inspecting Oliver's brigade HQ, Oliver temporarily commanded the division with equal skill, and was appointed CBE in March 1945.

After the war he returned to his legal practice and com­manded a brigade in the recon­stituted Territorial Army until 1950, being awarded the Territorial Decoration. His formidable brain power and energy were then deployed on behalf of the Angus and Dundee Territorial and Auxiliary Forces Association, The Earl Haig Fund for Scotland and to regimental charities and trusts. He was an ADC to the Queen from 1953 to 1963, and a deputy, and later vice lieutenant for Angus between 1948 and 1981; he was Honorary Colonel of the 6/7th Black Watch and, after the reorganisation of the TA in 1967, of the 51st Highland Volunteers.

Citation for the first of two DSO awarded to Major (temporary Lieutenant Colonel) James Alexander Oliver MBE of the Black Watch (Royal Highland Regiment). This first DSO is in recognition of his 'outstanding example' in the attack on the Miteriya Ridge on the night 23/24 October, 1942

Brigadier James Oliver : A short biography - an extract from 'The Red Hackle' - the Regimental magazine of The Black Watch.

The Trustees of The Black Watch