The following account is by Private Tom Renouf, of 7 Platoon of "A" Company, 5th Black Watch. Dr. Tom Renouf is the Secretary of the 51st Highland Division Veterans Association. His account picks up the operation on the 12th January 1945.

"We were transported by troop carriers along the main approach road to La Roche. I remember disembarking from the carriers and set­ting off on a march of a few miles. It was mid-morning, there was snow on the ground but the skies were clear-blue and the sun was shining at this time. As we were approaching La Roche there was the sound of distant gunfire but we did not suffer any shelling. Our platoon sergeant was Sgt. Bob Fowler, DCM, an outstanding soldier and a great leader. There was no platoon officer, because our officers were ambushed when out on recce in Opheusden (Holland) on 28th November, 1944. Bob ordered us to march in staggered sections - he always did things the correct way. As we approached La Roche the skies began to fill with clouds and soon it began to snow. The snowflakes were very very large. One of my section, Milligan, carrying the Piat bombs kept falling behind and I had to tell him to keep up. We entered La Roche from the high ground, the road bounded on our right by cliffs. I will never forget the sight of the town. It was completely demolished. All the buildings it seemed were razed to the ground, with a few chimneystacks sticking out of the rub­ble. It was worse than most of the towns in Normandy - rather of the devastation like Caen. The Royal Engineers were working in the town centre, trying to clear the rubble and open the road. As we moved through the centre of town it was snowing quite hard (with big flakes) and the snow on the ground was getting visibly thicker. Another sight I will never forget was three Derbyshire Yeoman walking towards us, the one in the centre with his head covered by blood stained bandages and being led by the others. This might have been the crew of the reconnaissance car, which was blown up by a mine, but there were more Derbyshire Yeomanry casualties to be seen. Our march towards the Start Line was punctuated with stops and starts".

"We moved out of La Roche uphill into the forests. It was about 1400 hours, the sky was heavy with clouds, it was now a dark day, with snow still falling. We travelled up this road for about one and a half miles, 'A' Company now in the lead, but not our platoon. There were many stops and starts and there were a few shells coming into our direc­tion. By this time we were beginning to feel the cold. 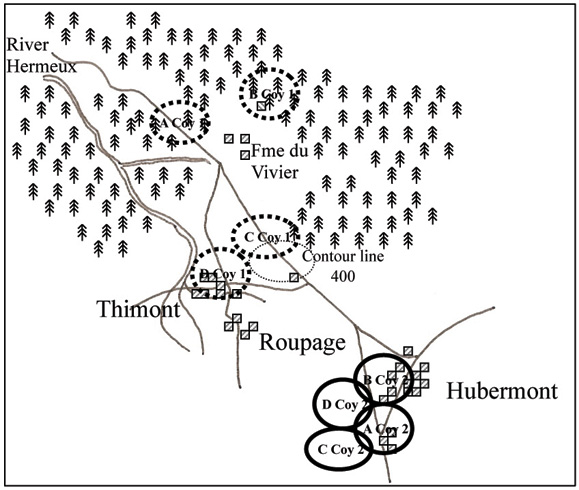 Map showing the details of the 5th Black watch attack on Hubermont. The attack took place the night of 12-13 January showing the initial (1) and final (2) company positions.

The leading section reached the open ground and was making to the Fme du Vivier when they were fired upon by an enemy tank. One man, Alexander Close, was killed others were wounded but the section was able to withdraw. The Company was deployed in defensive positions and told to 'dig in'. The ground, however, was too hard to dig slit trench­es. So we had to lay down in the snow among the trees, seeking what cover we could find. By now it was beginning to darken. Our platoon was deployed on the left hand side of the road, where we were mortar bombed. Since we had no adequate protection from slit trenches, several of the pla­toon were hit (Stan Suskins for the third time). The farm building was shelled by our artillery. An attack was mounted, but the odds were uneven - it was 'A' Company against enemy armour - and the attack was unsuccessful. Later that night a further attack on the farm was made, but it was found abandoned by the enemy. We heard the enemy tanks pulling out".

Tom Renouf always will remember the bitter cold of that night:

"The temperature had dropped well below zero, in fact it was one of the coldest nights during the coldest winter for 40 years. We did not wear our great coats in the attack, but had only our oil-skin gas capes, which kept us dry but not warm. Additionally we had had no rest for over 20 hours, and our exhaustion made us feel colder. Our bodies were chilled right through and our limbs were beginning to lose all feeling. Only by moving and stamping our feet could we fight the cold. Our hands were com­pletely numb and our rifles were like solid ice, and begin­ning to be seized up with frozen bolts. When the cold seemed to be at its worst and we seemed to have reached a limit of endurance, we were rescued once again by our wonderful Platoon sergeant, Bob Fowler, who - like a big St.Bemard - appeared with a large mug of rum, and dished out two large spoonfuls to everyone in the section. After this I began to feel my body again, although I still did not feel my limbs. The forward platoons had reached the crossroads, where there was a row of cottages, one of them a Cafe/Bar. There had been a skirmish and an exchange of fire. The Germans had been driven out but none of them had been injured or taken pris­oner. By this time it was nearly dawn, we were still crouched in the ditch and I remember being so tired that as I lay back against the wall I fell asleep. I slept for 20 minutes until we moved on. When I awoke I was numb with the cold, but much revived. "A" Company occu­pied the crossroads and Major Mathew, M.C., the Company commander deployed the three platoons in defensive positions. My platoon fortunately occupied the cottages, but the other platoons were out in the open. Day came with dear skies and the sun shining brightly. It had been one of the worst nights during the cam­paign, mainly because of the extreme cold and the utter exhaustion. Inside the cottages we relaxed our vigilance and lay down to rest."

Inside one of the houses near the crossroads south of Hubermont, called 'Au vieux Chêne', Private Tom Renouf, attempted to recover from the hazards of the night's operation:

"Suddenly we heard the sound of what seemed to be tanks heading from the village toward us. When we checked our rifles we found that the bolts still were frozen solid, the Bren gun also would not cock. We were at a low morale and not knowing what was head­ing toward us, our section panicked. Fortunately Major Mathew rushed us into the cottage and ordered us in harsh terms to get into our defensive positions. We recov­ered our arms and manned our positions by the windows.

"The German vehicle was not a tank but a large half-track loaded with troops. They approached the crossroads with all guns firing. They had to pass a platoon which was able to get some cover from their positions. Private Reeves lay at the side of the road with the pla­toon PlAT ready for action. As they got near he fired at the half-track and although he hit the vehicle, it did not damage the traction and the vehicle continued at speed, heading south. It passed No.8 Platoon, which was out in open ground, devoid of any cover. The machine guns on the half-track raked the platoon, which returned fire as best it could. Several of our comrades were hit, one of them died on the way back to the Aid Post. Although one of the Germans fell off the half-track and was killed, the vehicle sped off into the distance and back to the German lines. Next day 'A' Company moved into the village of Hubermont, where we finally were able to thaw out."

By 12th January the 51st Highland Division found that the opposition had become more determined. The reason for this was that the Division now threatened the main German withdrawal route of Champion - Erneuville - Ortho - Filly.

An account by Private Tom Renouf - 'A' Company, 7th Platoon, 5th Black Watch - of the attack on Hubermont. His account picks up the operation on the 12th January 1945. (The Ardennes, Subsequent Operations)
Dr. Tom Renouf is the Secretary of the 51st Highland Division Veterans Association.