"This is a very great occasion in the history of our famous division. Here at St Valéry on the 12th June 1940, a portion of the Highland Division, including its Headquarters, 152 and 153 Brigades, was captured by a large German force.

That magnificent Division was sacrificed in a last effort to keep the French in the war, True to Highland tradition the Division remained to the last with the remnants of our French Allies, although it was within its capacity to withdraw on Le Havre.

The Division drew on St Valéry the German 4th Corps, a Panzer and a Motor Division - in all six Divisions - and thereby diverted this force from harassing the withdrawal of other British troops on Le Havre and Cherbourg.

General Victor Fortune ordered the surrender of the division when it had run out of ammunition and food and all prospects of evacuation, which had been carefully planned by him, had failed. 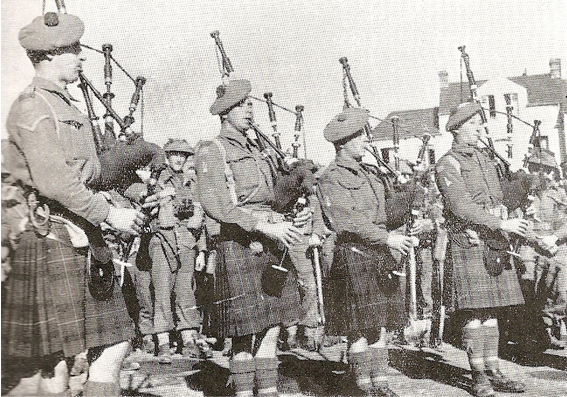 Pipers play in the town square of St. Valéry-en-caux after liberating the town.

That Highland Division was Scotland's pride; and its loss, and with it the magnificent men drawn from practically every town, village, and croft in Scotland was a great blow. But this Division, then the 9th Highland Division, took its place and became the new 51st Highland Division. It had been our task to avenge the fate of our less fortunate comrades and that we have nearly accomplished. We have played a major part in both the great decisive battles of this war - the Battle of Egypt and the Battle of France - and have also borne our share of the skirmishes and those costly periods of defensive fighting which made these great victories possible. We have lived up to the great traditions of the 51st and of Scotland.

I have disposed the Division, as far as is possible, in the areas where it fought at St Valéry. General Victor Fortune had his HQ here, 152 Brigade held the sector to the west, and 153 Brigade to the east. The Lothians and Border Horse held the sector to the south. The 154 Brigade and "A" Brigade ("A" Brigade was at that time operating with the Division) embarked at Le Havre.

I hoped by disposing the Division in that way to make it easier for some of you to find the graves of your relatives or friends who lost their lives with the St Valéry 51st. You will find at St Valéry and in the village cemeteries around, that the graves of our comrades have been beautifully cared for.

We have today playing with the Pipes and Drums of the Highland Division those of the Scottish Horse. There are also officers and men of the Lothians and Border Horse at this meeting."

Major General Rennie's address at St. Valéry on 3rd September 1944 after the return of the 51st Highland Division to St. Valéry.