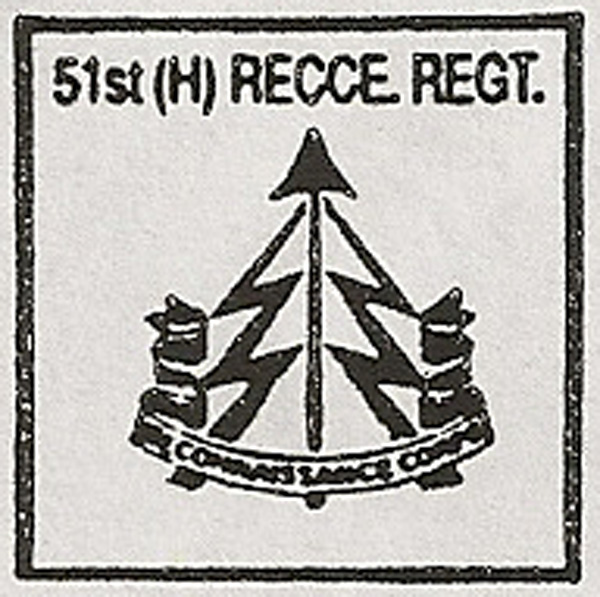 This account is taken from 'A Brief History of 51st (H) Reconnaissance Regiment (1941 -1943) and its Involvement in the Desert Campaign', produced as a pamphlet in 1991. The extracts concentrate on the activities of the Regiment and do not include the wider strategic picture which is covered to some extent in the publication.

"At night the Division moved into positions consisting of slit trenches dug just behind the start-line.

"At dawn there began one of the most trying days that the men were called upon to endure. There was to be no movement whatsoever during daylight, so each slit trench had to suffice for all purposes, even that of a latrine. With darkness came hot food, visits from senior officers, last orders and "good lucks".

"Prior to the attack 152 Brigade was given the job of making eight gaps (originally eleven, but three named Sun, Moon and Star, north to south, had already been made) through our own minefields to the assembly positions and Sgt. Gordon Marshall (No.17 Troop C Squadron), recalls that his troop, under Lieut. Wally Hammond, was ordered to El Alamein Station to protect the engineers whose job it was to make the gaps, later being joined by flail tanks to make the gaps in the enemy minefields.

"Parties also went out with drums of white tape, un­rolled them, fixed the tape to the cable at intervals so that it could not be blown or dragged away; after ninety minutes the nine miles of the start line and routes had been clearly marked.

"As Zero Hour approached the leading troops, with their cramped limbs, moved stealthily forward from their slit trenches to the start-line. A deathly silence hung over the desert, which was illuminated by the brilliance of the moon.

"At 21.40 - the firing of a single gun was the signal ­all Hell broke loose as 1000 guns started pounding the enemy positions, thus signalling the beginning of the battle of El Alamein. (Operation LIGHTFOOT). Initially the artillery aimed at the enemy's rear battery positions but gradually shortened the range to concentrate on their front line. By this time the shelling had almost reached saturation pitch with shells whistling overhead in both directions. The forward troops began their advance at 22.00

"During the night, as Doc Jolly recalls, he dressed a leg wound for Cecil Horsburgh (A Sqn.) and sent him back to the C.C.S (Casualty Clearing Station). Not long afterwards, as a result of a Stuka bombing raid, the doctor himself sustained a broken humerus and he too went back to the C.C.S. They were eventually evacuated to South Africa to recover, Cecil going to Johannesburg and the doctor to Pietermaritzburg. From the time they were wounded (1942) they never met again until last year (1990) when they realised that they were members of the same club.

"During the initial stages of the battle No.13 Assault Troop (B Squadron) under Lt. Geoff Hoffman, was used in its proper role but went in riding on tanks, and this was to become standard practice in the days to come.

"It was not long before we realised that desert warfare was quite different from what we had read or heard. The Middle East had, for many years, been a veritable hot-bed of intrigue but warfare in that area had been confined mainly to skirmishes of one sort or another.

"In this war nothing was straightforward, no clearly-defined lines, endless inhospitable desert. A hill as an objective could easily be, in fact, a mound, hardly discernible. Once the shells started falling there were times when it seemed they would never stop. Men suffered the most appalling injuries. They would be lying on the ground, crying out for help, covered by a mixture of blood and sand - hardly recognisable as human beings. It was night-time and with the sand being churned up by the shelling it resembled more than anything else an impenetrable fog. Vehicles were burning fiercely, many with the crews trapped in them. The battle had to go on, despite the carnage, and the stretcher-bearers were being killed too. One could only utter a few words of comfort that "somebody will be along shortly" and hope that there were stretcher-bearers nearby. This was real warfare - no holds barred. It was man against man and deadly machine against machine. Fortunately, unusual in modern war, civilian populations were not involved.

"After several months of warfare in the desert a healthy respect for each other had developed between the 8th Army and the Afrika Korps and, generally, the rules of warfare were observed. Some cases did occur of transgressions - on both sides - but they were relatively few.

"C Squadron with RHQ had taken up forward positions as part of the static battle occupying, very conveniently, some good trenches which had been dug by the Axis forces. Good use was made of these trenches as the troops were frequently subjected to enemy shelling as well as daily visitations from the Stuka dive-bombers, which had been attracted by the vehicle concentrations. Generally the Stukas would follow our DAF (Desert Air Force) bombers returning from bombing missions, the noise of which would give the Stukas an element of surprise.

"On one such occasion Ed Meekison records that RSM Paddy Morrison was dealing out eagerly-awaited mail to Troop Sergeants, who would distribute the letters to the men concerned. The DAF bombers had passed over, hardly being noticed, when down came the Stukas releasing their deadly load. On such occasions everybody became accustomed to diving into the nearest fox-hole. One sergeant did precisely that only to find that it was the RSM's and the RSM had got there first, with the unfortunate result that the sergeant's boots came into contact with the RSM's pate. Paddy maintained a diplomatic silence until the dust had settled but then let fly with a few well-chosen words, which resulted in the sergeant beating a hasty retreat to his own fox-hole. On occasions such as this the bombs would often fall on hard rock, causing them to splinter over a wide area, having a similar effect to anti-personnel mines, and resulting in heavy casualties, both in men and vehicles."

An account of the 51ST (Highland) RECONNAISSANCE REGIMENT which existed from 1941 to 1943; taken from the more detailed 'A Brief History of 51st (H) Reconnaissance Regiment (1941 -1943) and its Involvement in the Desert Campaign', produced as a pamphlet in 1991, and describes the origins, raising and initial training of the Regiment prior to North Africa.

Read more about Reconnaissance Regiment in our Division History section...

Montgomery was determined to attack the enemy using his infantry to create a gap and then push the armour through the gap created. The area for this was not the weaker sector in the south but the stronger part of the enemy position in the North. 30 Corps were to execute this attaching on a frontage four divisions wide...

An account of the bloody shelling at El Alamein on the 24th October 1942 from the 51st (Highland) Reconnaisance Regiment; an extract from 'A Brief History of 51st (H) Reconnaissance Regiment (1941 -1943) and its Involvement in the Desert Campaign', produced as a pamphlet in 1991

extract from 'A Brief History of 51st (H) Reconnaissance Regiment (1941 -1943) and its Involvement in the Desert Campaign', produced as a pamphlet in 1991