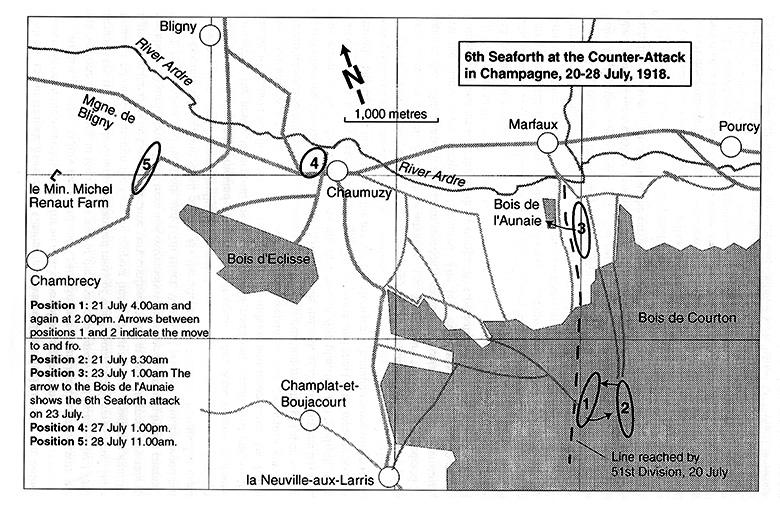 From "The Spirit of the Troops is Excellent. The 6th (Morayshire) Battalion, Seaforth Highlanders in the Great War 1914-1918" by Derek Bird

By kind permission of the author.

At dawn on the 20 July the 153rd and 154th Brigades launched the attack, with the 6th Seaforth remaining in the rear as part of the divisional reserve. In front of the 153 Brigade lay the Bois de Courton, a tangled mass of woods some 3,500 yards deep. Both Brigades advanced through the German outpost line without serious resistance. But the fighting in the Bois de Courton became very confused with, at best, the men only able to see about 50 yards through the trees and extremely vulnerable to ambush by the enemy. The 1/7th Gordons and the 1/6th and l/7th Black Watch all plunged into the wood but soon became split up into small parties. By the afternoon it became obvious that these three battalions had become badly intermingled and so at 6.30 p.m. the 6th Seaforth were placed under the command of the 153rd Brigade. They were ordered to move forward to the newly won positions that ran north-east from a point just east of the hamlet of Paradis to allow the 153rd Brigade to withdraw and re-organise. The handover did not go well as it was a very dark and wet night and the guides got lost. Nevertheless, the 6th Seaforth did manage to get into position by about 4 a.m. on the 21st. Following the withdrawal of the 153rd Brigade the task of continuing the advance was given to the 152nd Brigade. As the first part of this plan the 6th Seaforth were moved slightly to the rear to allow the 1/5th Seaforth and the 1/6th Gordons to pass through. Throughout the morning the men of the Morayshire battalion were subjected to heavy shell fire that caused about 60 casualties.

July 21 was another day of difficult fighting in the forest and at about 2 p.m. orders were given for the 6th Seaforth to advance. The Morayshire battalion was ordered to support the 1/5th Seaforth and 1/6th Gordons, paying particular attention to ensuring that the flanks were adequately covered. The left front was reinforced when 'A' Company joined up with the 1/5th Seaforth, 'B' Company went to the right front, and 'D' Company to the right flank, 'C' Company was kept in reserve. Once 'A' Company had got in touch with the 1/5th Seaforth they pushed patrols forward and discovered that, although the line had advanced about 200 yards, both Paradis and La Neuville-aux-Larris were still in enemy hands. 'B' Company advanced and actually made contact with the enemy before finding the 1/6th Gordons at about 5 p.m. Meanwhile 'D' Company advanced through the wood until halted by heavy machine-gun fire. They then took up positions facing north. One platoon of 'C' Company was sent forward to help 'D' Company at about 5 p.m., but was withdrawn again the following morning. The German continued to pound the British lines with shells all through the night, including the use of gas shells in the early hours of the 22nd.

That morning at 2.30 a.m, a conference was held at Brigade HQ where the commanding officers were briefed on the next stage of the attack. The 152nd Brigade was to take over the positions currently held by the 154th Brigade between the Bois De Courton and the River Ardre and prepare to advance at 6 a.m. the next day. Company commanders were briefed at the Battalion HQ at 5 a.m. and details of the plan were worked out. The 6th Seaforth started moving out of the forest at 10.30 p.m. and were at the start positions by 1 a.m. on the 23rd. The 1/5th Seaforth were on the right extending the line up to the bank of of the Ardre. The 1/6th Gordons who had been heavily engaged deep in the forest only arrived shortly before Zero hour, minus one company that had been relieved too late. They took up their place on the left up to the edge of the Bois De Courton.

The joint British and French artillery barrage opened at 6 a.m. but some of the shells fell short with the rear of the barrage falling only 40 yards in front of 'B' Company's positions. To their left it fell on to both 'C' Company and the 1/6th Gordon's positions causing many casualties, one company of the latter losing all its officers before the advance even began. Five minutes after the barrage opened the German artillery retaliated, but most of their shells fell about 250 yards behind the Highlanders' positions. As soon as it was realised that British shells were falling short and 'C' Company was suffering casualties 'A' Company was moved in behind them to provide support. Once the infantry advance got underway 'B' Company on the right made good headway with a minimum of casualties until they reached their objective north-west of the Bois De L'Aunaie. Here they were subjected to heavy shell and machine-gun fire while they were digging in and suffered many casualties, including Captain John Mackintosh their commander. 'C' Company on the left suffered badly from both the artillery barrage falling short and from enemy machine-gun fire coming from positions on their left flank. This company lost all it officers before reaching the spur south of the Bois De L' Aunaie. Some of the battalion continued to fight on through to the objective and formed a new line in the sunken road 30 yards south of the wood.

'D' Company, in support, moved forward to the Bois De L' Aunaie and started digging in, but after being subjected to heavy enemy shelling they retired a short distance and dug a series of posts just short of the wood. 'A' Company took up positions in the sunken road, and also established posts on the spur covering the southern edge of the wood. At about 2 p.m. two platoons of the 1/7th Argylls were attached to the 6th Seaforth to help fill the gap that had developed between the two leading companies, but the heavy enemy artillery barrage forced them to retire again. At dusk the 1/5th Seaforth put out a number of posts that connected the sunken road with the rest of their battalion which had, by then, moved forward to a line just inside the western edge of the wood. The 6th Seaforth had suffered heavily with 21 men killed, but they had inflicted heavy casualties on the enemy and had captured 45 prisoners, along with 3 heavy and 15 light machine-guns. Due to the large number of casualties the two Seaforth battalions were reorganised with the 1/5th Seaforth forming two composite companies, and the 6th Seaforth being combined into a single being combined into a single company. The tiring nature of the fighting is illustrated by the use of the men from 'B' Echelon to replace 100 of the most exhausted men from each of the two battalions. These extremely weary men were then withdrawn from the line and sent back to join the brigade reserve to get some respite from the fighting.

For the next three day the brigade maintained its position but throughout the period, especially on the afternoon of the 26th, they continued to suffer casualties from both high explosive and gas shells. The forward battalions sent out patrols to ascertain the German dispositions and the 1/5th Seaforth were able to make good use of the information they provided to push forward of the Bois De L' Aunaie and establish new posts.

Plans were made for a general renewal of the advance on a three-brigade front on the morning of the 27th.

The Battles of the Marne [ History ]

On the morning of 14 July 1918, before the first troops of the 15th, 34th, 51st, and 62nd British Divisions had reached their destination, the Germans launched an offensive on a front of 80km east and south-west of Rheims, crossing the Marne.

6th Seaforth at the Bois de Courton, July 1918. Extract from "The Spirit of the Troops is Excellent. The 6th (Morayshire) Battalion, Seaforth Highlanders in the Great War 1914-1918" by Derek Bird