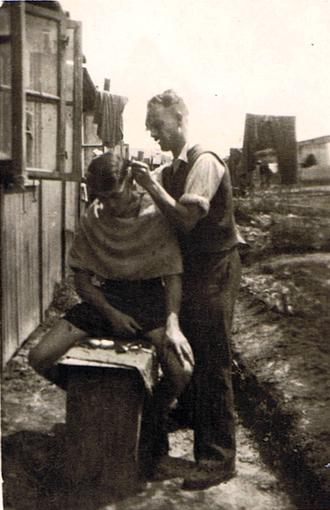 This photo was sent to us by Russel Gatehouse along with 3 others that all belonged to his Father, Corporal John Cuthbert Gatehouse, RASC.
The photo's annotation reads "Summer 1944 Stalag 383, JCG cutting hair" and is therefore thought to show John (JCG).
John was captured at St. Valery in June 1940 and is thought to have been held at Stalag XXI B POW camp in Schubin, Poland from 1940 until being moved to Stalag 383 nr. Hohenfals, Germany in 1944.

Thanks to Russel Gatehouse, John's Son, for sending in this photo