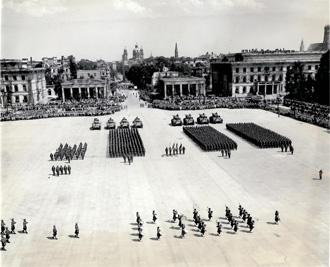 Set of photos showing American Forces conducting a ceremony to hand over a drum of the 5th/7th Gordon Highlanders which had been lost in 1940. (c. Photo 1945/46, City unknown).

Photo is part of a set sent to us by Dave Clark who's Father was 320391 Lieutenant James Henderson Clark of 5th/7th Gordon Highlanders.

The set show the 5/7th Gordons on parade as part of the ceremony as well as the hand-over itself.