Photograph from the Nazi propaganda magazine 'Signal', showing Highland Division POWs taken at Veules les Rose, east of St. Valery. Colin Hunter, 4th Camerons' Intelligence Officer, is in the centre right of the picture with a bandaged eye and Captain Derek Lang, with half his face visible, is at the extreme right.

In June 2015 7th Battalion The Royal Regiment of Scotland conducted a battlefield study of the withdrawal of the 51st Highland Division on the Somme in 1940 back to St. Valéry.

The tour consisted of five days of battlefield study and two days of commemorative events. The party of 20 plus was hosted by the town of Veules-les-Roses, just to the east of St. Valéry. No mention of the visit can be made without commenting on the wonderful hospitality of the people of Veules-les-Roses and the other places that hosted commemoration events. The latter part of the exercise was marked by moving commemoration events, parades and functions that reflect the warmth and thanks of all who we met.

A highlight was the dedicating of the path up the cliff from of Veules-les-Roses to Captain Derek Lang. The path was opened by Sarah Hunt, daughter of Sir Derek.

The 1940 photograph of POWs being led up a track at Veules-les-Roses in June 1940 is captioned in Sir Derek's book "Return to St. Valéry" as follows:

"A photograph from a battered copy of the Nazi propaganda magazine 'Signal' which shows the Highland Division prisoners-of-war: taken at Veules les Rose, Colin Hunter is in the centre right of the picture with a bandaged eye and the author, half face, at the extreme right. "

The picture here is a better copy than that in the book. Colin Hunter was the 4th Camerons' Intelligence Officer. 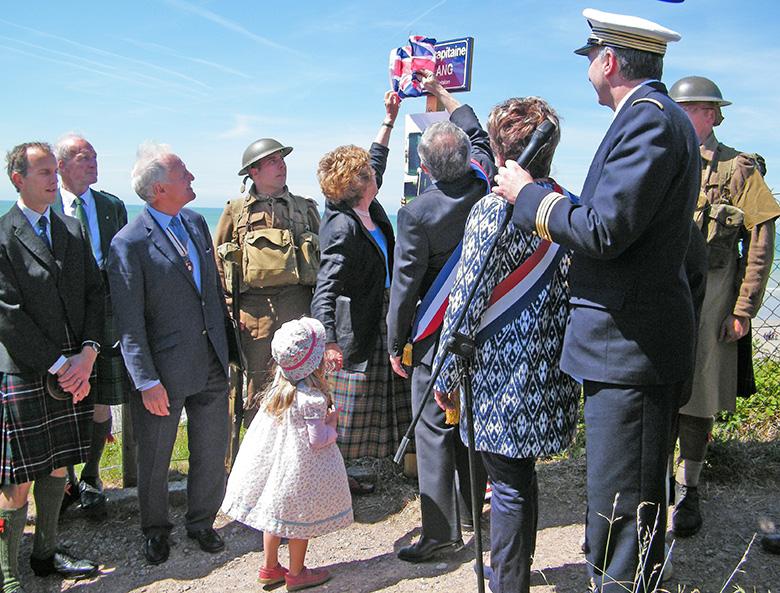 The town of Vueles-les-Roses, just to the east of St. Valery, dedicate the path up the cliff to Captain Derek Lang. The path was opened by Sarah Hunt, daughter of Sir Derek. 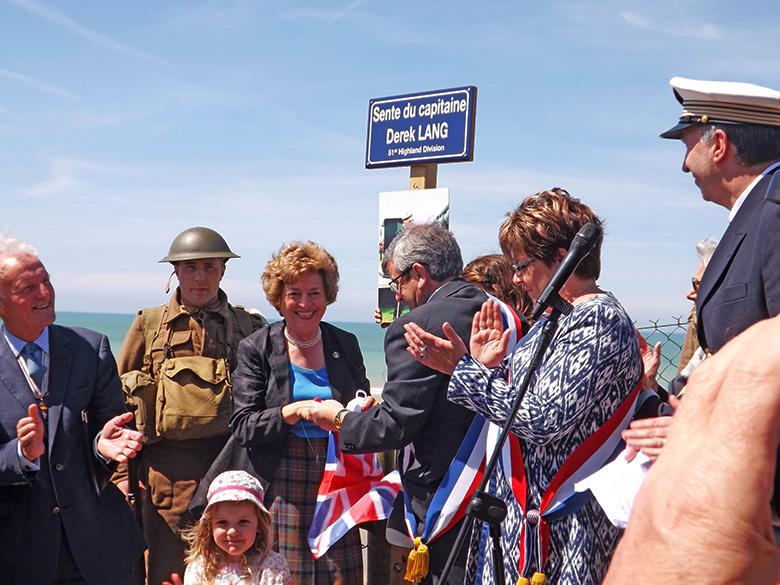 Photograph of Sarah Hunt, Daughter of Sir Derek Lang Path at the unveiling of the cliffside path dedicated to him at Vueles-les-Roses in June 2015.