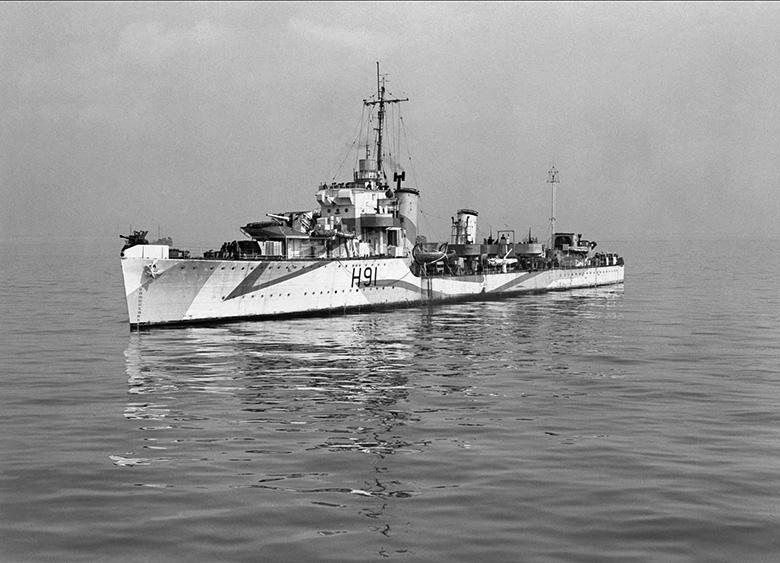 The HMS Bulldog helped evacuate men from St. Valery on 10th June 1940. Although damaged in Stuka raids was able to limp back to the Isle of Wight on one engine, still containing two unexploded bombs.

By early June 1940, the greater part of the British Expeditionary Force already been evacuated from Dunkirk and adjacent areas. An important exception was the 51st Highland Division which had come under French command and was now falling back towards Le Havre. Their advance force reached that port early on 10 June and were safely evacuated, but the bulk of the Division were cut off with the French Divisions by German Panzer Units, commanded by the then little-known General Erwin Rommel, and their last hope of rescue seemed to lie in St. Valery-en-Caux, to the northeast.

Admiral Sir William James, commanding the naval evacuation forces, sent a small naval force from Le Havre early on 10 June to cover this contingency, including Boadicea and Bulldog. The Boadicea having suffered collision damage, had been refitting in Chatham and missed the Dunkirk evacuations. A frantic rush had her ready just in time to be sent straight to the St. Valery operation, under the command of Lt. Commander M.D.C. Meyrick, who had assumed command only two weeks earlier.

HMS Bulldog had passed the early months of the war away from the flotilla acting as 'chaser' to the aircraft-carrier Glorious hunting raiders in the Indian Ocean. Bulldog had returned to home waters in March 1940, and worked independently from Scapa Flow, Rosyth and the Tyne for several weeks, this period culminating in her famous part in saving the Kelly. The damage she then sustained from an E-boat put her in dock­yard hands, to be operational again, like the Boadicea just in time to sail to St Valery.

Arriving off St Valery on 10 June, by the afternoon the Boadicea had picked up at least 100 evacuees, including 60 soldiers of the Highland Division and a number of French ci­vilians, while further out the Bulldog had picked up a boat­load of soldiers. Then suddenly they came under fire from German artillery and tanks which had reached the edge of the high cliffs bordering St. Valery. Our ships silenced this en­emy fire with their main armament, but shortly afterwards both the Boadicea and Bulldog were fiercely attacked by two waves of German dive-bombers.

Eighteen JU 87 Stukas attacked the Boadicea, and she took three direct hits, two in the engine room and one in the boiler room, causing heavy casualties, (including eight killed outright), and severe damage. With her engines out of action, Boadicea lay helplessly awaiting the next inevitable air attack, while the destroyer Ambuscade, (herself damaged, but less seriously, by enemy shellfire), approached to take her in tow.

Meanwhile, during the same attack, the Bulldog, then about two miles from the Boadicea had been singled out by a further six Stukas and also sustained three hits, one boiler being blown up and a second put out of action by an unexploded bomb, while a third unexploded bomb lodged between decks. Fortunately, the Bulldog suffered only minor casualties.

With the two ships thus crippled and sitting targets for renewed attacks, there came what can only be described as a miracle. Despite being a hot and sunny June afternoon, only minutes after the .dive-bombing attacks a thick layer of fog came down and rest of the afternoon and night.

Boadicea's Code Books were thrown overboard in a weighted eyeletted canvas bag, but the Fleet Signal Book and Conduct of the Fleet were both ditched separately in their own lead containers. As the destruction of all signal books was being reported to Captain Meyrick, the Leading Telegraphist arrived on the bridge to report that, thanks to a tray of lead batteries, the wireless transmitter/receiver had power and was serviceable. The Captain was thus in a terrible quandary. Should he report Boadicea's desperate situation in plain language?

While he was pondering the dilemma, Ambuscade miraculously located and then got the Boadicea under tow despite the dense fog. German bombers were heard overhead, searching for their 'sitting ducks'. Orders were given on no account to open fire lest their positions should be reveal ed.

Throughout the night, Boadicea's First Lieutenant, Lt. Hubert Fox, watched the threatened bulkheads of the engine room hardly daring to breath. The Captain stayed on the bridge, looking into the fog. No one was allowed below decks, everyone had to remain silent.

The Boadicea was successfully towed back to Portsmouth which was reached the following afternoon. First on board were two Customs and Excise officers: "What quarantine measures did we propose for the two dogs?" (Ed. see extract further on for explanation)

The bomb damage was so severe that Boadicea remained under repair at Portsmouth for two months, having paid off.

Meanwhile the Bulldog, blessing the same providential fog, managed to raise some steam on one boiler and limped to the Isle of Wight on her own, from where she was also towed to Portsmouth dockyard.

An interested crowd stood watching as they came alongside in the dockyard, but experienced observers have unkindly said they'd never dreamed that dockyard workers could move as fast as they did when informed that there was an unexploded bomb aboard.

The Bulldog also had a lengthy stay in the dockyard', during which Lt. Commander Wisdom was tragically killed in an air raid.

Unfortunately, the fog on the afternoon of 10 June proved two-edged. While giving our two ships the chance to reach home waters it also prevented the rescue Ships approaching St. Valéry to embark the troops that night, and the following night was to prove to be too late. 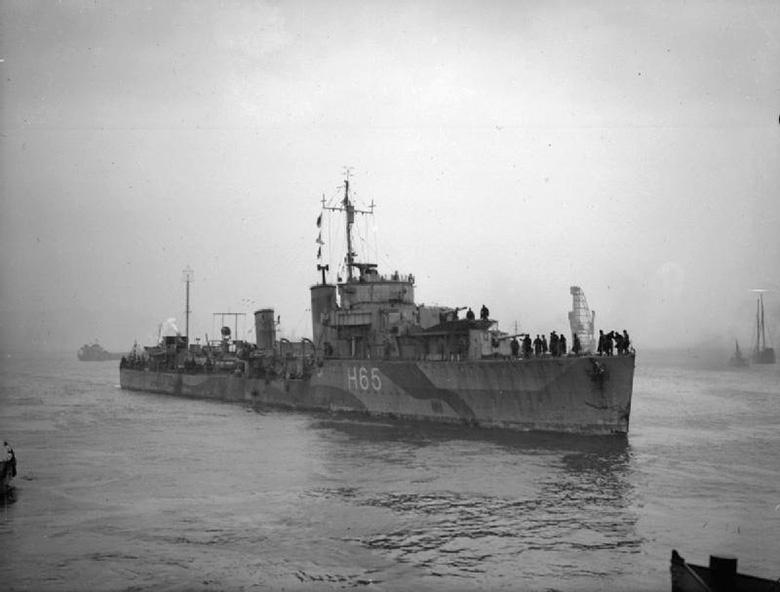 HMS BOADICEA, a British "Beagle" or B-Class Destroyer, pictured here in coastal waters off Greenock. The Boadicea was badly damaged off St. Valery on 10th June 1940 by Stuka bombing raids whilst evacuating men.

Note by Michael Back: We have now reached the final extracts from Commander Hubert Fox's 1939/1945 letters, during which he was the First Lieutenant of HMS Boadicea. These vividly describe her June, 1940, action off St. Valery-en-Caux. We are extremely grateful to Commander Fox for having allowed us to reproduce these fascinating letters, which have recalled those dramatic days so feelingly:

Boadicea with two other destroyers, was now sent to Havre to evacuate troops. It was shimmering June weather, and I remember the electric atmosphere. We had no communication with the shore and it was tragic to contemplate the opportunities lost. On the afternoon of 10th June, cruising along this coast, we saw a body of men on the beach and went to investigate. I was sent ashore. Some time afterwards I described what followed:-

It was half past three on a hazy afternoon: the sea was calm. I stood with a group of soldiers on a shingle beach under the cliffs, a mile to the westward of Veulette. We were waiting for Boadicea's motor boat and whaler to return from the ship, nearly a mile to seaward, for another load of men.

On the coast road above us the advanced units of the German Army were making their way to the west. French soldiers had thrown away their arms and dressed as peasants they were greeted with friendly waves as the German soldiery went by; all the British had retreated to the beaches. Exactly how near the Germans were we did not know until I was returning with the last load at a quarter to five, when ship and boats came under fire. We had embarked about eighty, mostly British soldiers, but there were also a woman, four children and two dogs.

The boats were quickly hoisted as shells burst in the water around us, and the ship shaped course to the north-west. However, the Germans did not intend to let us off as lightly as that; at half-past-five, nine Junkers 87B dive bombers were sighted emerging from cloud at a height of about 8,000 feet, almost directly overhead.

Escaping steam clouded over the ship, the haze thickened into fog almost at once, and the enemy were not seen again. The Berlin wireless that night reported that we had been sunk.

The ship's company were at action stations when the aircraft were sighted and every gun opened fire without orders.

The ship shuddered to a stop and I slid down the bridge ladders and carried out a rapid survey. The engine room and after boiler room were flooded, but otherwise the ship's structure seemed to be fairly sound. The Engineer Officer and engine room crew were still in the flooded engine room except one or two who had escaped and were lying mortally wounded on deck. All W./T. was out of action. I reported to the Captain on the bridge.

We then jettisoned heavy gear, torpedoes, depth charges, ammunition, cable. We emptied the fresh water tanks. We started the pumps. We placed shores and collision mats. We prepared to be taken in tow. We applied first-aid - a great many men were badly burnt.

We turned out the boats and floats in readiness to abandon ship. All the worst lags rose magnificently to the occasion.

Broken down and in danger of sinking off the enemy coast, we were lucky that night to have a chance encounter with the destroyer Ambuscade, who took us in tow. Throughout the night 1 watched the threatened bulkheads of the engine room and boiler room, hardly daring to breathe. The Captain stayed on the bridge looking into the fog. No one was allowed below decks - and we had to keep very silent.

The next afternoon we reached Portsmouth Harbour; Butlin's Fun Fair was swinging and turning on Southsea Common, the kiddy cars painted in the colours of our Allies.

When, at last, we reached the dockyard and secured alongside nobody took any interest at all until two officials, representing His Majesty’s Customs called. What quarantine measures did we propose to take for the two dogs?

An officer of the 51st Highland Division called Richard Seddon was one of those we brought home from France. He wrote of his experiences in Boadicea in a book called "A Hand Uplifted":

"As trained soldiers we were deeply impressed on board Boadicea by the conversational tone in which the Royal Navy restored order from brief chaos, so that within an hour of the explosion, without any voice being raised above drawing-room pitch, the ship had collision mats over holes, the list had been reduced to a more or less even keel, wounded had received first-aid, the ship lightened, and the bulkheads shored up.

"The show which the Navy put on was under-played to the point of casualness. They were courteous, hospitable, and friendly. It made our stampings, shouting, and square bashings in the Army ashore seem a little uncouth. As a show of casual ability to cope it impressed us to the point where speech failed."

A description of the action around St. Valery in June 1940, compiled from personal accounts by Cmdr. Meyrick, Lt. Cmdr. Howse, Mr.F.G. Bull, and A. Hales from HMS Boadicea, and from HMS Bulldog, Cmdr. Hewitt, and Lt. Cmdr. Bryden