The following account was attached to the 2nd Seaforth's War Diary for the period in question.

This account covers the part taken by the 2nd Battalion in the Operations of February 1945 which resulted in the clearing of the West bank of the Rhine from Nijmegen. The operation, which was under command of the Canadian Army, took the form of a steady advance south between the Maas and the Rhine until the 9th U.S. Army was met near Venlo. The main task carried out by the Highland Division was the clearance of the southern half of the Reichswald Forest, the capture of the western half of Goch and the clearance of the Siegfried and other defences in its area.

Our Brigade was in reserve on the 9th February and by the time the battalion had crossed the Maas and moved at midday into the assembly area in the woods on the German frontier, the forward Brigades had successfully assaulted the enemy forward defences and established themselves in the Western fringe of the Reichswald. At 3.30 we moved forward to the forward assembly area in this fringe, which was still under intermittent mortar fire, and from there advanced down the main axis into the forest, passing through the 5th Camerons astride it at dusk. We were held up by spandau fire only about 500 yards in advance of the Camerons and were ordered to consolidate our position and stay put till morning. 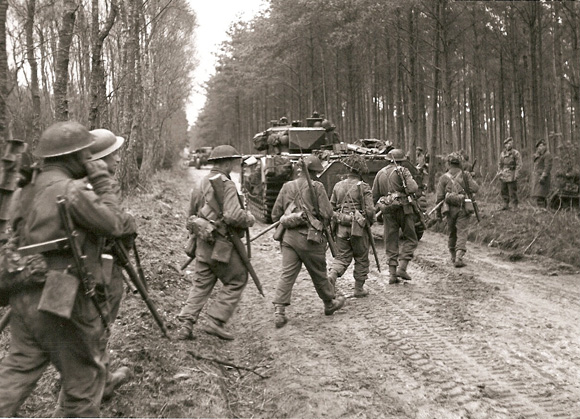 Men of the 2nd Seaforth Highlanders advancing through the Reichswald Forest. In close support of them are flame throwing Churchill Tanks. So far no heavy concrete emplacements have been encountered so the flame throwers have not been in action but they advance with the forward troops so they can be called on for instantaneous action. 152 Brigade. Sgt Silverside 11 February 1945

The Battalion objective on the 10th was the main Hekkens-Kranenburg road where it crossed the axis. On its capture 5th Camerons were to pass through and capture a position astride the next lateral road and 5th Seaforths were to turn south through us and attack Hekkens. The advance began at 1130 on a one company front in the order C - D - BnHQ - A - B, the two forward Coys each having a troop of tanks and an F.O.O. in support. The artillery were firing concentrations on and beyond the Battalion objective.

The leading two companies came under enemy mortar and arty fire when about 600 yards from their objective and deployed C astride the axis and D to the right of it. They then met with considerable small arms fire from the enemy dug in on and in rear of the main road and an anti-tank gun opened up on the leading tanks, temporarily immobilising them. The leading Coys succeeded however in fighting their away across the main road where they dug themselves in, still under fairly heavy small arms and mortar fire. Profiting from the enemy's concentration on C and D Coys, A and B Coys were then deployed and reached positions across the main road to the right of C and D.

The threat of a counter attack was averted by 5th Camerons launching their attack, which was also successful, through us at 3.30 that afternoon, though the mortaring and shelling on our position continued during the night. It was difficult to estimate the German casualties but we took 35 P.Ws.

The next three days were spent in reorganising on the basis of HQ and support Coys, 3 Rifle Coys and one reinforcement Coy. This reorganisation was forced on us by the lack on N.C.O. reinforcements. We held two positions on the southern edge of the forest till 16th when we moved out into open country south of the front to begin the advance on Goch. That evening the Battalion attacked S.E. from Kessel down the Goch road. The attack took the form of three separate company battles, each with its own artillery programme. D Coy captured a cross roads about 1500 yards down the road, B Coy passed through and captured two woods 500 yards beyond, and A coy completed the objective by seizing Grafenthal monastery in the North. By 1045 p.m. the whole of the rather light opposition had been subdued and the remaining two battalions of the Brigade were able to pass though and launch their own attacks.

The Brigade was now within two miles of Goch and it was decided that on the 18th the Battalion should approach Goch from the North, seize a bridgehead over the anti-tank ditch surrounding the town and bridge it for the Brigade, who had the role of clearing the town. The same technique was followed as on the 16th - three separate company attacks. Complete surprise was obtained as the enemy had expected the attack along the more obvious Eastern axis and the Battalion was firm on its objective with an Avre bridge over the ditch within four hours of leaving the start line. 153 Brigade moved rapidly through us and also achieved complete tactical surprise.

The next week was spent mopping up and reorganising. D coy took over from C coy as reinforcement Coy. On the night of the 26th the Battalion took part on its forth and last battle of this operation. The Bde task was to open up a new axis into Goch entailing an attack to the South-East. The Battalion task was complicated by a water obstacle, bridged only by Xapok on the near side of out start line. This restricted the vehicles and supporting arms which could be got across to the Battalion to those which could be ferried over in Buffaloes. A was left forward Coy, C right forward, B to pass through and capture a third objective.

A Coy attacked first and found themselves held up by enemy very firmly defending a strong group of farm houses. C Coy on the right met equally stubborn resistance from a strongly built house. Considerable artillery fire was brought down on these two objectives during the night and eventually A and C got into their objectives. A just before C just after first light the next morning. In the afternoon the Battalion was relieved by 9th Royal Scots and on 28th moved to Nijmegen for rest and refitting.

Battalion casualties during these operations were:

After the defeat of the German Ardennes offensive the 51st Highland Division returned to Holland to recommence offensive operations. Operation Veritable was the code name for the operation which would clear the Germans from the ground between the parallel rivers of the Maas and the Rhine and drive them back over the latter.

This account was attached to the 2nd Seaforth's War Diary - covers the part taken by the 2nd Battalion in the Operations of February 1945 which resulted in the clearing of the West bank of the Rhine from Nijmegen. (Reichswald)